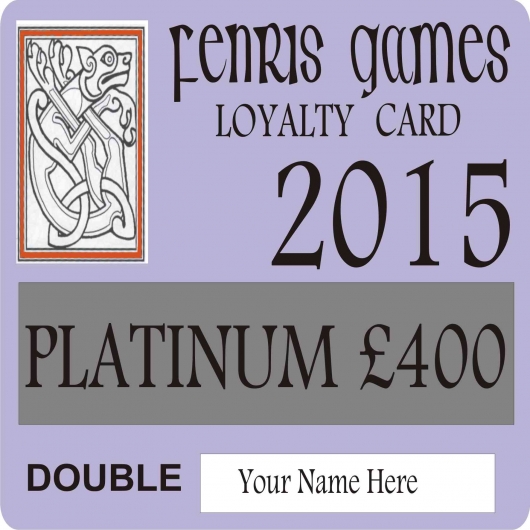 Following the success of our last three Loyalty Card Reward Schemes (with prizes worth £750, £850 and £950 respectively) – and due to popular demand, we’re launching 2015’s Fenris Loyalty Card now, to give a range of discounts in return. Loyalty Cards will be available to purchase between now and December 31st 2014.

The first 48 hours of availability will see the Loyalty Cards doubled in value (ie. a bronze card at £50 will be worth £100 store credit) after which, values will be as follows:

4) last but not least, the Platinum Loyalty Card, costing £200, will be worth £275 when redeemed for Fenris Games stuff.

NB. All loyalty cards bought by/for overseas customers will carry an additional £30 cost to help cover the additional costs of airmail postage; however this will translate to an extra £40 credit on each card (so a Silver Overseas card will cost £105 but be worth £145 in redemption value.)

Everyone buying a loyalty card will also receive a free limited edition 28mm master casting for each level of card bought of one of the miniatures planned for 2015 – which will include more horror cultists, more Draugr, and should also include assorted 28mm wildlife, the first of our cyberpunk and post-apocalyptic MMCII models and more Cthulhu Mythos monsters. In other words, Gold card holders will receive 3 x master castings throughout the year, and so on.

Every Loyalty Card holder will also have their name put into a prize draw to win a huge prize – 1 of everything new we produce in 2015. This could include bases, scenery, miniatures, laser-cut kits and more. In 2014 we produced over 140 new products (valued over £950), so the potential value of this prize is well over £500 !

Loyalty Cards may be redeemed from 1st January 2015, valid until 31st December 2015, and may be spent in any combination of small or large orders, to the redeemable value of the relevant card. Postage is free no matter how many orders in total you use to spend your Loyalty balance.

To spend a Card’s value, or part of it, the holder will need to place a direct order through the webcart using a promotional code.

Loyalty Cards can be put in the buyer’s name or that of any other named person (if intended as a gift). Cards are limited to a maximum of 3 per person, and may not be used in conjunction with other special offers or sales. Bronze Age miniatures and any other imported/bought-in ranges are NOT eligible for payment from Loyalty Card balances. Loyalty Cards MUST be presented if being used to make purchases in person at trade shows we attend.